Are There Alternatives to CPAP?

If you are having difficulty adjusting to regular CPAP (continuous positive airways pressure) Therapy, you can investigate one of the alternative options here. All of our alternatives to CPAP can be helpful to people with less severe* symptoms. Each product is clinically proven, but please check their suitability for your sleep disorder.

Note: Everyone may have apnoea episodes during the night, but it doesn’t necessarily mean you have Obstructive Sleep Apnoea or require any therapy.

*The severity of your symptoms can open up your options to alternatives to CPAP therapy, because your snoring may not affect your sleep, but you may want to find a remedy.

Intus Healthcare is here to help with a complete selection of options and advice.

One of the critical indicators that we use in our sleep test report is the AHI, there are other indicators but to illustrate a simple idea of your potential issue I’m going to explain the AHI, which stands for the Apnea-Hypopnea Index.

Intus Healthcare advice: If you are concerned, you may have OSA then a sleep test/sleep study done by us or the NHS will help you find out. If your result confirms Sleep Apnoea, you will probably benefit from (and be eligible for) CPAP therapy.

Alternative Therapy for Snoring and Apnoea

Around 1 in 4 people are positional snorers; meaning they only snore while sleeping on their back. Half of all the sleep apnoea patients are also positional based, meaning they can sleep normally on their side.

Somnibel is a tiny device worn on the forehead. It vibrates when you’re facing upwards, gently encouraging you to sleep on your side.

Positional Therapy is a clinically-proven alternative to CPAP therapy, with studies showing it can obtain similar results in patients with position-dependent sleep apnoea.

For snoring or Obstructive Sleep Apnoea

The Somnibel can be purchased to treat snoring or Obstructive Sleep Apnoea.

If you are purchasing Somnibel to treat Obstructive Sleep Apnoea as an alternative to your current prescribed treatment, then please discuss positional Therapy with your consultant, and ensure it is a suitable option for you.

Please Note: All orders are fulfilled on the understanding that this treatment has been approved for your use. If you are purchasing Somnbel for snoring, then we would recommend seeking confirmation of your suitability.

A less invasive option for treating snoring and mild OSA

The Somnofit Mandibular Advancement Device is a proven anti-snoring mandibular advancement device that offers an alternative to CPAP therapy for mild OSA sufferers. The Somnofit Mandibular is a proven treatment for snoring and can be useful for OSA. It works by moving the lower jaw forward and keeping it there while you sleep. By doing so, it opens up the throat to allow for greater airflow, reducing the chance of the obstructions that lead to snoring and apnoeas.

Many clinical studies have shown that this method of treating snoring can be tremendously successful and has also succeeded to alleviate mild obstructive sleep apnoea.

The Somnofit itself consists of two oral mouldings; one for the upper jaw and one for the lower. They are heated in water to soften the moulding material (thermoforming) and then bitten into creating an exact fitting for your teeth. It is as simple as that to get the custom fit you need for a comfortable and effective splint.

The two mouldings are connected by a supple strap to keep them aligned as they need to be, ensuring that the lower jaw cannot be pulled downwards by gravity, and will instead stay positioned forwards for optimal airflow. Within a few minutes of the adjustment, you have a personalised Somnofit, ready for you to use and reduce your snoring.

Six such straps in varying lengths come supplied with the kit so you can gently move the lower jaw forward, to find the best and most comfortable range of advancement. By gently increasing this forward repositioning over several days or weeks, you can ease your jaw’s muscles into this new position.

Who can benefit from using a Somnofit?

The Somnofit is suitable for:

Somnofit is NOT suitable for people who:

The Somnofit MAD is engineered and manufactured in Switzerland by an established healthcare company called Oscimed SA. In 2008 they were awarded the ISO 13485:2003 certificate for their outstanding quality management systems for the development, manufacturing and sale of medical devices and other healthcare products. Oscimed puts the utmost care into delivering quality products that conform to the latest medical standards. 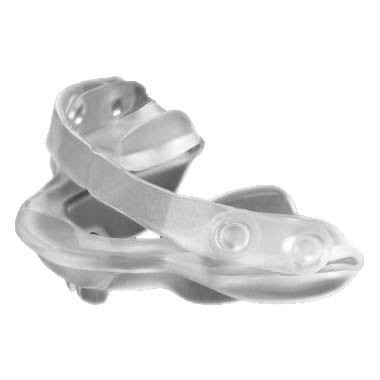 Is Mandibular Advancement for you? Use Somnolis to find out!

As the entry-level version of the Somnofit MAD, this Somnolis Mandibular Advancement Splint (MAD) is the most affordable way to try this method of oral appliance therapy to reduce snoring. You fold the two parts together and put it in your mouth when you go to sleep.

Try it now by lying on your back, then push your lower jaw forward a bit and feel how you can breathe more easily.

The Somnolis is ideal for taking with you when visiting friends or family, or when travelling abroad, avoiding the embarrassment of your snoring, keeping everyone awake.

Please note that Somnolis is not as a permanent solution for snoring and certainly not for sleep apnoea.

If you suspect sleep apnoea (breathing lapses), please book a sleep study or consult your doctor. For simple snoring, the Somnolis MAD can be the perfect introduction to treatment with a mouth splint.

Please note: This product is designed to be a “proof of concept” device. The intention is for it to used to find out if Mandibular Advancement is an effective method of treating your snoring or Obstructive Sleep Apnoea, as a short-term option for periods such as a weekend away. It is not intended to be a long-term solution. If effective, it is then recommended to move onto a longer-term option such as the Somnofit. 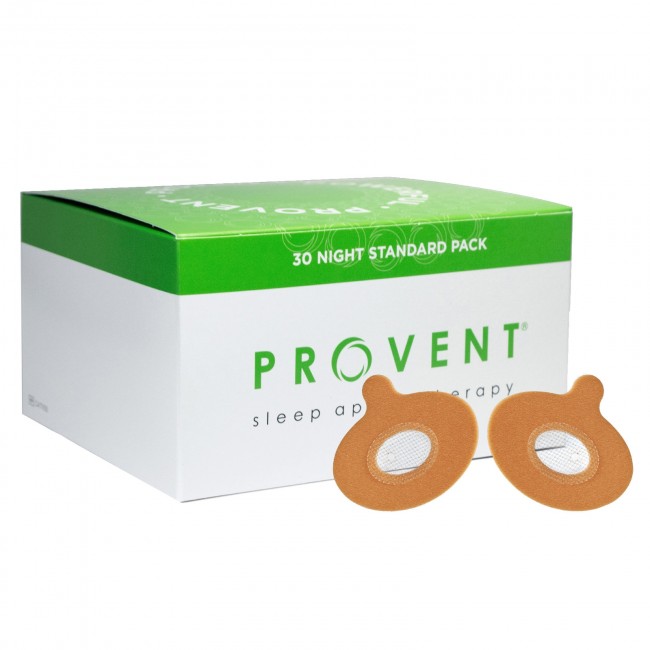 Provent Therapy is a simple, non-invasive treatment for Obstructive Sleep Apnea (OSA). The Provent Nasal Device uses a valve design that attaches over the nostrils and secured in place with hypoallergenic adhesive. The valve opens and closes, redirecting air through small holes to create resistance when breathing out. Because Provent Therapy is a small, single-use, disposable device, it’s also discreet and very convenient.

During inhalation, the valve opens, allowing the user to breathe in freely. When exhaling, the valve closes, and air passing through the nose is directed through two small air channels. This increases the pressure in the airway (called EPAP or expiratory positive airway pressure), maintains pressure and helps to keep the airway open until the start of the next inhalation.

Provent is primarily intended for those with Mild and Moderate OSA, who have tried CPAP and are finding it challenging to maintain compliance (i.e. use regularly). In terms of the effectiveness of the treatment, CPAP remains the “gold standard” – but if a patient is unable to use it every night, then Provent is available as an alternative treatment option.

While CPAP increases the pressure on both inhalation and exhalation; Provent Therapy increases the pressure on exhalation only. CPAP increases pressure in the airway using forced air, while Provent Therapy uses the patient’s breathing to create pressure during exhalation. Because the air pressure generated through Provent is not as strong as CPAP can be, it is only suitable for Mild and Moderate Sleep Apnoea. It simply cannot create enough pressure for Severe OSA, for which CPAP remains the only proven treatment option.

Provent is also useful for short-term use while travelling, thanks to its small, simple design. Each night’s set is individually pouched. There is no need for electricity or equipment, and the device can be discarded after single-use.